MaltaToday September 20, 2013: "Ambassador to the US Marisa Micallef presents credentials to US President Barack Obama. 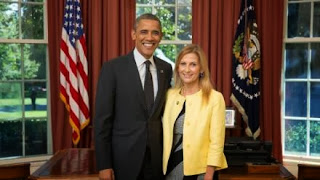 New ambassador to the US Marisa Micallef presented her credentials to the President of the United States, Barack Obama, at the White House in Washington DC.

The US President extended a warm welcome to her and her daughter and stated that he looks forward to working closely to deepen the already close relations between the two countries.

According to the government's statement, President Obama said her appointment marks a historic moment for Malta, as she is the first female Maltese Ambassador to the United States.

Obama also told Micallef that the United States is committed to working with Malta to address the challenge of migrants and refugees.

The President of the United States noted that Malta and the US share a long history of friendship.