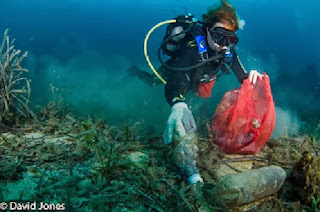 The MaltaIndependent on 03/10/2013: UK-registered charity Plastic Oceans Foundation believes that Malta is ideally placed to take the lead in resolving what is fast becoming a major threat to the environment and human health – plastic pollution.

David Jones, foundation executive responsible for sustainability and education, was recently invited to Malta by the Professional Diving Schools Association (PDSA) and he had talks with the Malta Tourism Authority, the European Parliament Information Office in Malta, the University of Malta, the Education Ministry and Malta National Aquarium.

Mr Jones also took part in an underwater clean-up at Qawra Point together with Ocean Mysteries Diving and Sharklab-Malta. The foundation hopes that the next step will be the organisation of a conference, bringing together government, business, industry, and education entities, to look at the issues and challenges with a view to formulating an action plan to bring about long lasting and sustainable change.

Plastic Oceans was formed three years ago and its mission is to reduce plastic pollution in the oceans and eventually eradicate the problem. The foundation has been producing a powerful, high-end documentary in high definition for cinematic release. The film – which should be out in early 2014 – along with the campaign, will raise global awareness to the problems of plastic pollution, highlight and promote positive solutions, empower people to become part of the solution, support the biggest cleanup the world will ever...read on.