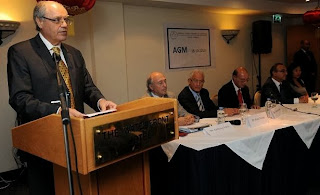 MaltaIndependent 20/10/2013: Finance Minister Prof. Edward Scicluna said that Malta should now be on the look out to attract a Chinese financial institution since financial services in China have reached a global level-playing field.

Prof. Scicluna was speaking during the annual General Meeting of the Maltese Chinese Chamber of Commerce, held on Friday 18th October 2013 at the Waterfront Hotel, Gzira. The DOI issued a press statement on the event on Sunday afternoon.

“I will strive as Minister of Finance to attract Chinese financial services to Malta. Such a possibility would boost Malta’s attractiveness to Chinese investment in the region, and boost the Rembibi (RMB) as an international currency. Through such strategically placed location Malta could offer itself as a gateway to Chinese investment in the region,” Prof. Scicluna said.

During his address, Prof. Scicluna noted the historically strong friendship between Malta and China, and said that over the past six months, this has now been elevated to a higher level.

He noted several initiatives, among them the landmark Memorandum of Understanding with the Chinese Government, which will see a global and established Chinese energy corporation become a strategic partner with Malta’s state-owned Enemalta.

He also referred to the restoration and embellishment project on the St Lucija Garden  of Serenity funded by the Government of the People’s Republic of China as part of...read on.