Beneath Malta’s Beauty, a Tangled History 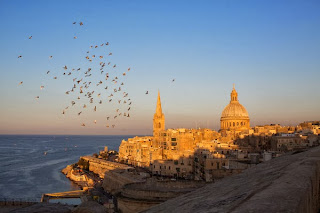 Elisabeth Eaves for New York Times 06/12/2013: Nicholas de Piro doesn’t look like a warrior monk. As the bespectacled grandfather padded around his 16th-century palazzo, pointing out curiosities like a gilded sedan chair and silver medical tools, he appeared more likely to offer me a cup of tea than slay anyone in the name of Christ. And yet that is the sort of thing Mr. de Piro’s order, the Knights of Malta (officially the Sovereign Hospitaller Order of the Knights of St. John of Jerusalem, of Rhodes and of Malta), were known for in their heyday. Drawn from the most noble families of Europe, they left their homelands, took vows of chastity and obedience and dedicated themselves to fighting infidels. The order no longer wages war, focusing instead on caring for the sick and poor. Until I arrived at Mr. de Piro’s doorstep on the Mediterranean island-nation of Malta, though, I’d had no idea that the Knights of Malta still existed.

The history of Malta — actually an archipelago that includes three inhabited islands, just 50 miles south of Sicily — is peppered with violence and disorder. Today, though, it is hard to find a corner of the country that doesn’t feel peaceful and safe. Its crystal-clear, intensely blue waters make for some of the best snorkeling and scuba diving in Europe, while its beaches, rocky coves, arid hills and warm weather have long attracted northern neighbors in search of cheap sunshine. And yet not even 2 percent of visitors come from the...read on. (recommended)