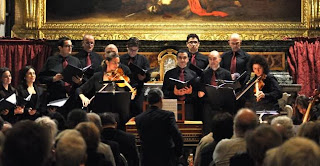 Di-Ve 04/01/2014: The unprecedented success achieved by last year’s first edition of the Valletta International Baroque Festival, which was attended by over 6000 people, encouraged the organisation of this second edition which will be held between the 10th and the 26th of January and which will include three weekends of Baroque performances and events for all the family as well as the much welcomed Baroque Ball.

Full details of this year’s programme were announced during a press conference which was addressed by Kenneth Zammit Tabona, Artistic Director of the Valletta International Baroque Festival, Jose Herrera, Parliamentary Secretary for Culture and Local Government and Dr Michael Grech, Chairman of Teatru Manoel, which is the organiser of this Festival.

In his address, Kenneth Zammit Tabona explained the uniqueness of the Festival which takes places inside a number of baroque churches, palaces and venues inside Valletta which further promote the baroque identity of our capital city. This year’s venues include the Painted Salon of the Museum of Archaeology, the former Auberge de France, the Hall of St Michael and St George at the Presidential Palace, the churches of St Nicholas, the Jesuits, St Catherine’s, Ta’ Ġieżu, St Paul’s Anglican Cathedral and St John’s Co Cathedral and of course the Teatru Manoel built in 1731 and still going strong as the living heart of culture in Malta.

“This Festival, which started from an ambitious idea, rapidly gained so much popularity both in Malta and overseas due to the unique venues and the very appealing programme of concerts by leading international and local baroque exponents. This year, it is promising a bigger and...read on.