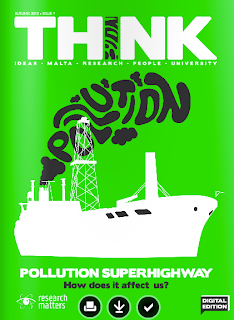 Times of Malta 12/01/2014: The online version of the University of Malta’s research magazine Think has attracted well over a million viewers from over 100 countries around the world, including the US, the UK, Brazil, Russia, South Africa and China.

The free digital news stand Issuu (http://issuu.com), which features Think on its website, recently received over 100,000 hits a day over the space of a week. Its online readership has grown rapidly from just a few thousand in its first issues.

The magazine tells the stories behind research conducted by University students, staff, researchers and alumni.

Over the past seven issues, stories have ranged from robots exploring ancient sites around Malta to ideas that could solve Malta’s traffic problems.

The latest issue explores how Malta is being affected by shipping pollution and how intelligent pills could automatically scan the insides of human bodies to detect disease...read on.