"We'll be back to rock Floriana's Il Fosos square this summer..." 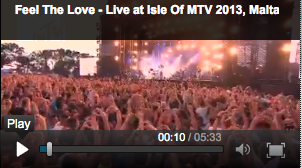 2014 marks the eighth year the free concert returns to the Med, which attracts visiting fans from all around Europe.

With the reputation for showcasing some of the biggest names in the international music scene, Isle Of MTV Malta has previously welcomed performers including Lady Gaga,  Black Eyed Peas, N*E*R*D, David Guetta, Snoop Dogg, Maroon 5, Will.I.Am and many more...read on.