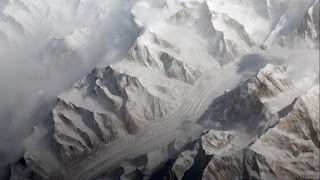 The Weather Channel 19 August 2015: Central Asia's Tien Shan mountain range is home to glaciers that bring water to tens of millions of people, but their future is threatened thanks to warming summer temperatures, according to the results of a new study.

Published earlier this week in the scientific journal Nature Geoscience, the study says the glaciers have lost about a quarter of their ice since the early 1960s, and stand to lose as much as half their current ice if current...read on.