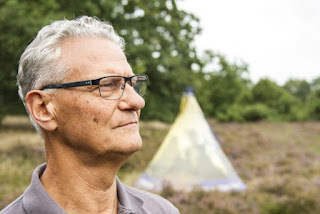 TenCate Autumn 2015: There he stands, the four year-old, as proud as a peacock in the black-and-white photo. Behind him is a white tent, standing low but defiantly upright. Theo Fortgens, now 72, started camping as a toddler and has never stopped. Ask what his favourite tent is and he’ll you it’s the ones he himself once sewed from TenCate outdoor fabric.

‘This is a Carl Denig’, Theo Fortgens continues, while holding up the old photo. ‘That was my aunt’s. I often used to go camping with her in Egmond (NL).’ He can vivdly remember how things went in those days. Fridge and TV in the tent? Certainly not! ‘You didn’t have a car then, so all your stuff went in a camping box, which you gave to Van Gend & Loos (a transport company) to take to the...read on.