Plastic bag use down 71% since 5p charge

The number of single-use carrier bags handed out by shops in Wales has fallen by 71% since charges were introduced in 2011, according to a report. 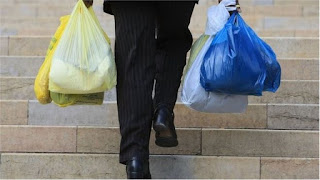 BBC News 4 September 2015:  The review, for Welsh ministers, estimates between £17m and £22m raised by the 5p charge has been donated to good causes by retailers.