In a warming world, more rain can mean less water

Countries 'may need to prepare for a world where the snow reservoir no longer exists,' researchers say, highlighting the challenges of both too much water and not enough. 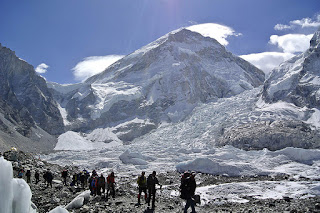 The Christian Science Monitor 16 November 2015: As California enters its fifth year of severe drought, and as the state pumps more and more groundwater up to the surface, Central Valley farmers watch their fields literally sinking.

They may not think they share much in common with rice growers in Bangladesh, or Sherpas in Tibet, but they are united by one common phenomenon: mountain snowmelt.

In a study published in Environmental Research Letters on Thursday, a team led by Columbia postdoctoral fellow Dr. Justin Mankin predicts just how, and how much, regions around the world will feel the impact of changing snowmelt as global warming frequently turns snow into...read on.