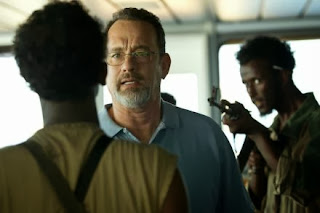 Malta Today 22/10/2013: Red carpet glamour and celebrity reality programmes may lead you to think that a life in Hollywood is all about drama, all the time. But a chat with anyone involved in film production 'on the ground' - or sea-bound, as is the case for the Tom Hanks-starring, Paul Greengrass-directed Captain Phillips, now showing in local cinemas - will probably reveal that the priorities lie very much elsewhere.

"The shoot went incredibly well when you consider the challenging dynamics involved," Maltese-born production manager Katryna Samut-Tagliaferro tells me, actually sighing in relief even though it's been months since the film - "60 per cent" of which was filmed in Malta, according to Samut-Tagliaferro - waved goodbye to Malta's famous water tanks after a relatively smooth shoot, which was wrapped in around six to eight weeks.

Samut-Tagliaferro, a veteran production manager and coordinator for films like Saving Private Ryan, Spy Game and 28 Days Later to her name, recounts how she managed to convince the Captain Phillips production team to relocate to Malta after the production ran into...read on.
Trailer on » YouTube