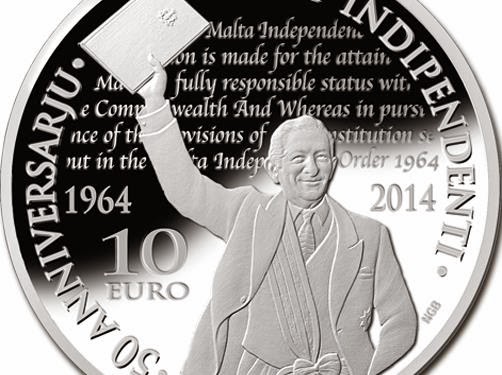 Malta Independent 11/09/2014: On 15 September the Central Bank of Malta will issue a silver coin commemorating the 50th anniversary of Independence. The coin has a face value of €10.

The coin was minted at the Royal Dutch Mint. It is struck in 0.925 silver and has a weight of 28.28 grams and a diameter of 38.61 mm. The coin is of proof quality and the mintage is limited to 5,000 coins. The coin was designed and engraved by Noel Galea Bason.

The reverse of the coin features the first Prime Minister of Independent Malta, Dr George Borg Olivier, waving the Independence Instruments which were presented to him by the Duke of Edinburgh at a public ceremony held in Floriana on 21 September 1964, the first day of...read on.